Popular Mechanics is an American magazine first published January 11, 1902 by H. H. Windsor, and has been owned since 1958 by the Hearst Corporation. Issues feature regular sections on automotive, home, outdoors, science, and technology.

On page 91 of the April Issue, John Herman's Digital Clinic section provides a "Tech Tactics" feature box which declares Adobe Flash browser plug-in to be "on its way out" - and provides instructions on how to switch off the "buggy, insecure and resource-hungry software". 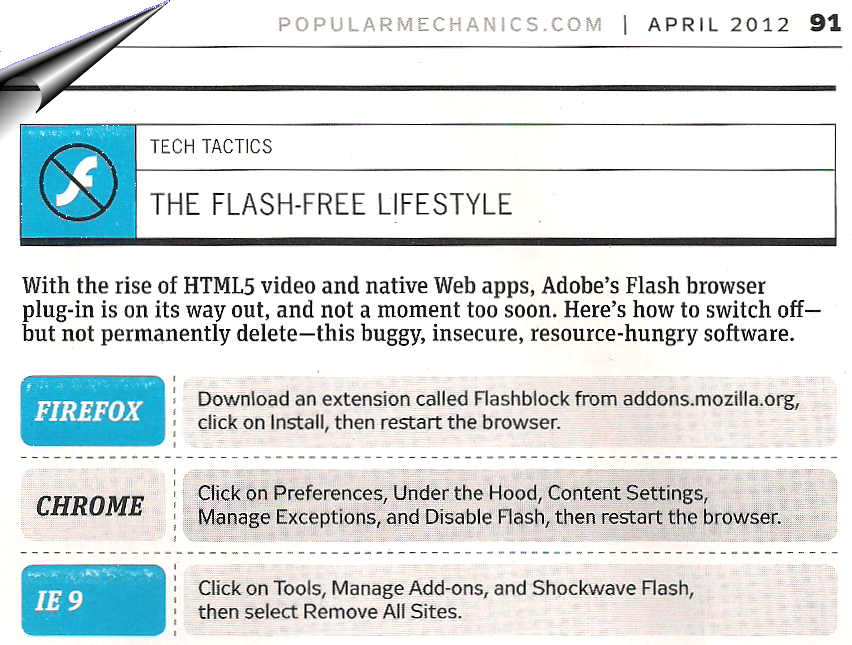 Now, while it is dangerous to predict anything when it comes to IT; I can agree with the general notion that some of HTML5's features will replace those previously only found in Shockwave / Flash applications (assuming the major browsers can even agree on them) - and that the Flash player will pretty much follow the same arc as the desktop browser, or the desktop computer itself.

Flash was a "media technology" only because HTML5 tags like <audio> and <video> never existed before. Once groups like Google, Apple and Mozilla can get over their file format wars and actually support a media standard, it will be quite appropriate to boot Flash off a large number of web pages.

The player's real strength lies not in showing clips and banner ads - but in interactive graphical applications like business analytics and gaming anyway.

My real beef here comes from my respect for Popular Mechanics as a rational voice - which I have always found to back up it's opinions - of Cars, Tools, Snowblowers, Lawnmowers. Cameras and all - with satisfying evidence of research and a nice supply of statistics.

In this case, Herman seems to proclaim the common Flash-bashing complaints du jour as accepted truth - with no need to support his conclusions with any citations or test data.

While I concur with your "Tech Tactics" editor's conclusion that Adobe's Flash browser plug-in may be marginalized by the introduction of HTML5 and native apps, I was surprised that the instructions - on how to remove it - also conclude that it is "buggy, insecure and resource-hungry".

I've had few problems with Flash myself, but have heard this conclusion repeated frequently. This observation often comes from those in the Apple camp (which ironically produces the greatest number of devices that don't even use it, so I don't quite understand the resonance of their concerns).

Could you please follow-up with some independent resources, data or test results, which support your publication's claims - that the Flash player has more bugs, is less secure or consumes more resources than other apps? I would love to learn more about these findings. If my device is in greater than average danger - due to my use of Adobe Flash - I would definitely want to read why!

Otherwise, I'm sure you would agree - that blindly repeating popular but anecdotal conclusions - is not the best trait of a magazine with your reputation of research and factual reporting.

Here's the response I received the following day:

Thank you for contacting us. We have forwarded your email to the department at the magazine who would be most interested in your comments.
Full Version