Here's an infographic that I found very helpful.

The IT Zen of Futurama 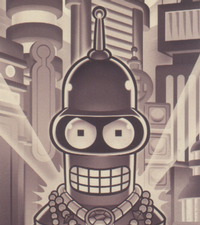 In episode 49 of Matt Groening's cartoon series Futurama, Bender the robot is hurled into deep space, raises a small colony of beings, and eventually encounters some kind of ultimate consciousness who renders some simple advice: "If you do things right, people can't be sure you've done anything at all..."

This simple statement reveals an important truth - not just for beings of ultimate consciousness - but for those who work in Information Technology as well.

In a nutshell: Your clients should never be required to change their behavior for you, or even notice that you even exist at all. They should be able to perform their work every day, regardless of what you might have done during the nights in-between.

In a way, people treat Internet applications much in the same way they treat Politics: They rally behind the candidate of change, only to respond to the fears and apprehensions that humans naturally have - when the change is actually happening to them. 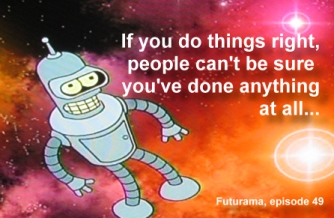 Consider Facebook for example, or poor Netflix. Some manner of research (hopefully not focus groups, that's another topic entirely) likely led them to develop a new suite of features. New features are great, and thoughtfully applied improvements are the lifeblood of any Internet application. But to incorporate them into an existing application often requires UI change, and business management will often attempt to clump changes into larger groups. "That's a great idea for a feature Al, let's bundle that into the 3.0 release!".

That's the killer. Bundling your revisions into larger releases will likely overwhelm your users with too many changes at once. And like I said: people like  change in theory, but hate actually dealing with it. Changing your application's feature set, in conjunction with a change to the application's overall UI or style, might sound like a great promo-filled event in the boardroom. But to some percentage of your loyal, well-trained user base (not to mention your helpdesk); it will be treated like a disaster.

Facebook and Netflix are huge, so their blunders became fodder for bloggers and even mainstream news. For smaller enterprises the results can be harder to measure, but their smaller scale means the damage can be proportionally worse. Users will feel a loss of control, they'll complain (and probably not to you). Worse of all, they may just disappear.

So make small revisions, even if you have to make them more frequently. Try to insure that people won't be sure you've changed anything at all.